Angular is an application design framework and development platform for creating efficient and sophisticated single-page apps. Angular is a JavaScript framework written in TypeScript. Google runs it, and its primary purpose is to develop single-page applications. As a framework, Angular has clear advantages while also providing a standard structure for developers to work with. It enables users to create large applications in a maintainable manner. Angular development is enhancing HTML features helps developing a truly interactive and dynamic user interface for both web and mobile apps.

Angular is a hugely popular tool for software development now a days. It dominates as the most established name in the world of front-end JavaScript framework. Two Google engineers, Misko Hevery and Adam Abrons had developed the first version of Angular in 2009. It was known as AngularJS, and it was primarily meant for the company’s internal uses. Soon, Google officially launched AngularJS as an open-source framework in 2010. 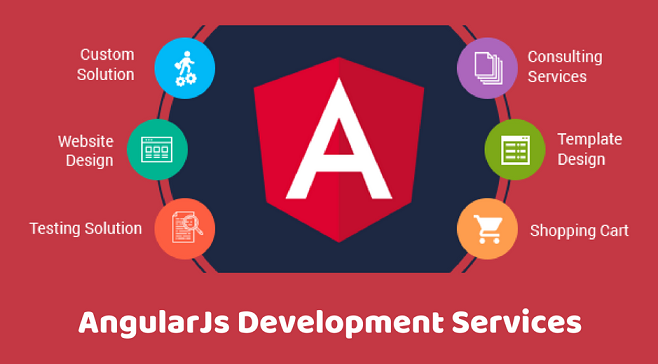 Why to use Angular?

The DOM (Document Object Model) treats an XML or HTML document as a tree structure in which each node represents a part of the document. This framework uses regular DOM. Consider that ten updates are made on the same HTML page. Instead of updating the ones that were already updated, Angular will update the entire tree structure of HTML tags.

Angular applications are built using TypeScript language, a superscript for JavaScript, which ensures higher security as it supports types. It helps catch and eliminate errors early in the process while writing the code or performing maintenance tasks. TypeScript defines JavaScript as a set of types, which helps users to write JavaScript code that is easy to understand. Typescript is not mandatory for developing angular applications. However, it is highly recommended because it provides excellent syntactic structure when the codebase is easy to understand and maintain.

Data binding is a process that enables users to handle web page elements through a web browser. It uses dynamic HTML and does not require complex scripting or programming. Data binding is used in web pages that include interactive elements such as calculators, tutorials, forums and games. This enables better enhanced display of the web page when the pages contain large amounts of data.

Angular uses HTML to define the UI (User Interface ) of the application. HTML is a less confusing language than JavaScript. It is also a declarative and intuitive language with instructions like ng-app, ng-model, ng-repeat and form control.

Angular uses the Jasmine test framework. The Jasmine Framework provides multiple functions for writing a variety of test cases. Karma is a task-runner for tests that use configuration files to set up start-ups, reporters, and test frameworks.

Angular framework is embedded with the original MVC (Model View Controller) software architectural setup. However, it is not according to the established standards. Angular does not ask developers to split an application into different MVC components and build a code that could unite them.

Angular is a full-fledged model-view-controller (MVC) framework. It provides clear guidance on how the application should be structured and provides two-way data flow while providing the actual DOM. 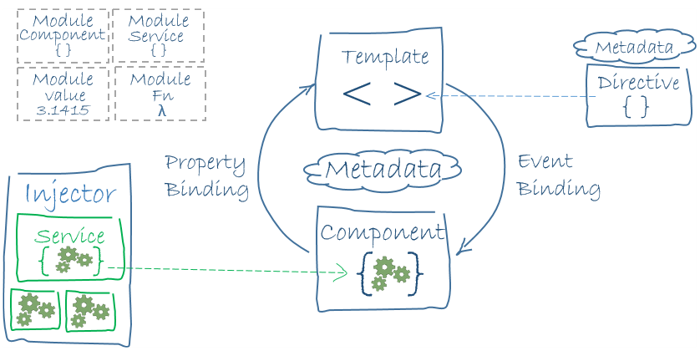 An Angular app has a root module, named AppModule, which provides the bootstrap mechanism to launch the application. A NgModule declares a compilation context for a set of components that is dedicated to an application domain, a workflow, or a closely related set of capabilities.

Each element in the application defines the class that holds the application logic and data. A component typically defines a part of the user interface (UI). Each angular app contains at least 1 component known as the root component that connects the component hierarchy with the Page Document Object Model (DOM). Each element defines a class with a login in the TypeScript format and a page view in the HTML template.

The Angular template combines the Angular markup with HTML to modify HTML elements before they are displayed. There are two types of data binding:

Property Binding: Property binding is used to pass component class data and facilitates the interpolation of calculated values ​​back into HTML from the application. This enables users to interpolate values that are computed from your application data into the HTML.

Metadata tells Angular how to process a class. This is used to decorate the class so that it can configure the expected behavior of the class. It comprises of inner information of the data provided.

When you have data or logic that is not related to the view but needs to be shared among the elements, a service class is created. The class is always associated with the nInjectible decorator.

Lot’s of Angular versions have been published since its inception. All of these versions add to the functionality of the framework. Bellow are the major Advantages of Angular Framework